At IDS, when we say multi-caliber capable, we mean it. We don't just mean that you can use the same weapon to shoot 5.56 and 300 AAC BLK, and that's where it ends. We mean all of our weapons can shoot ANY standard caliber; 5.56 NATO, 300 AAC BLK, 7.62 NATO, 6.5 Creedmoor, and .260 Remington all out of the same receiver. You want to go from 5.56 NATO to .300 BLK? It's as simple as a barrel change. No tools, no special fixtures, just a 5 second barrel swap. You want to go from 5.56 NATO to 7.62 NATO? It's no more complicated than a field strip. No tools or special fixtures required. Just remove the 5.56 NATO sub-assembblies and replace them with 7.62 sub-assemblies. It's that simple. Open bolt or closed bolt, full size or compact, we make multi-caliber belt feds, and we ONLY make multi-caliber belt feds. 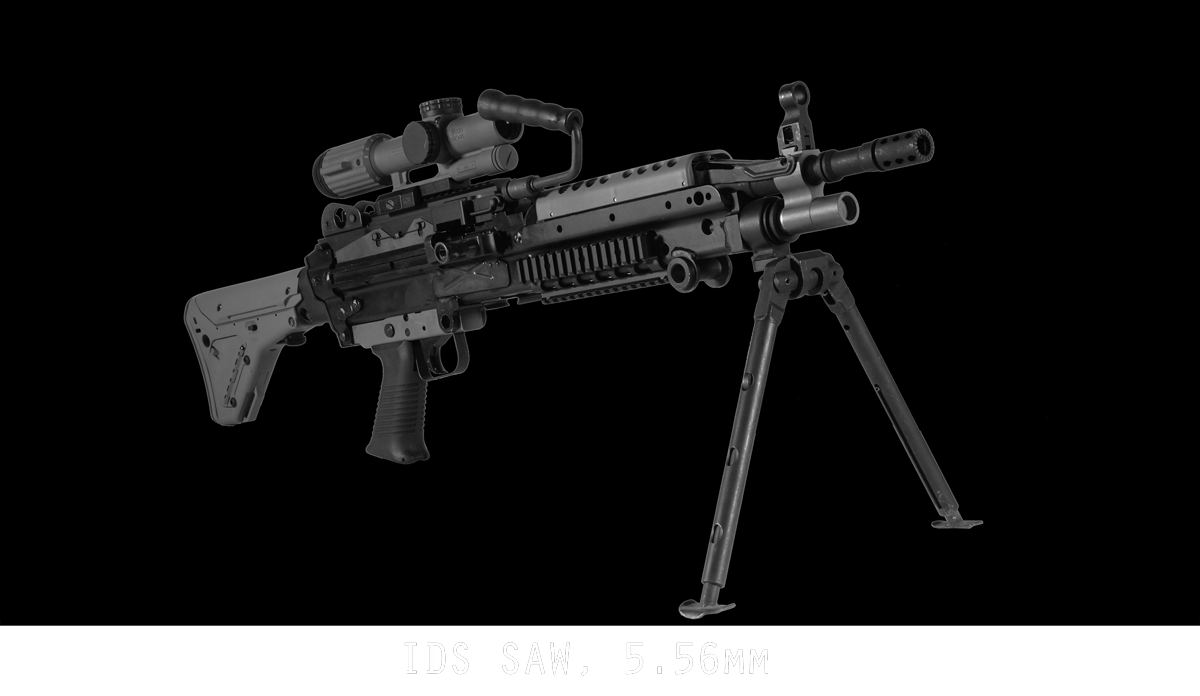 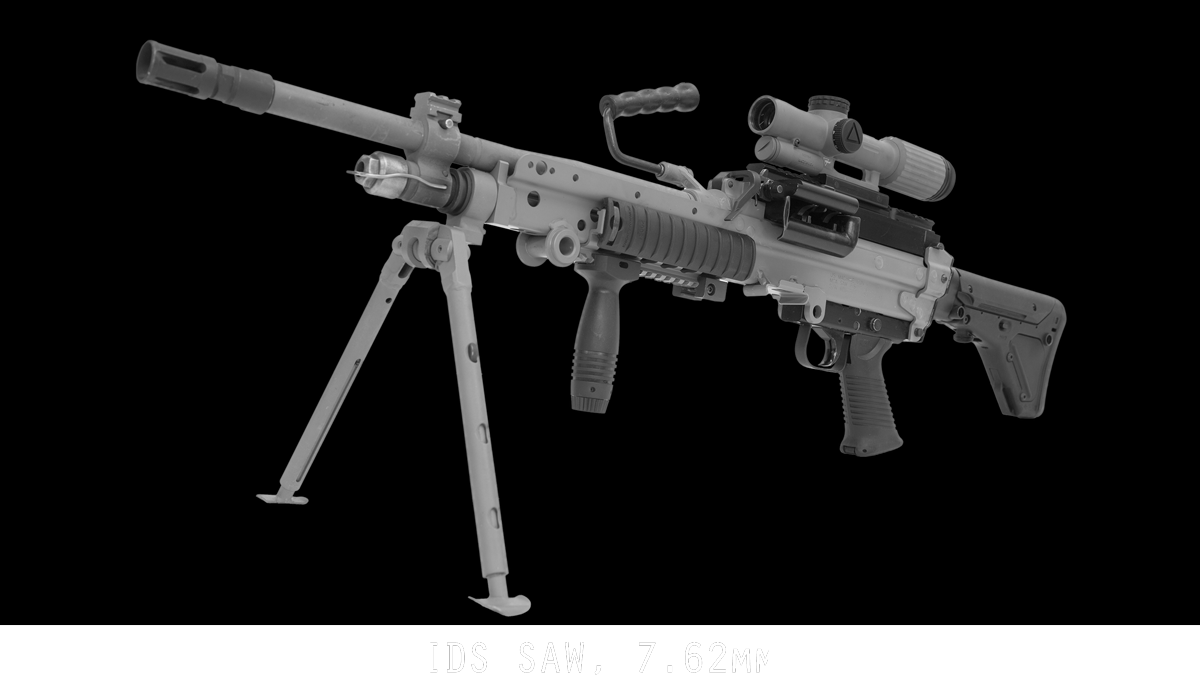 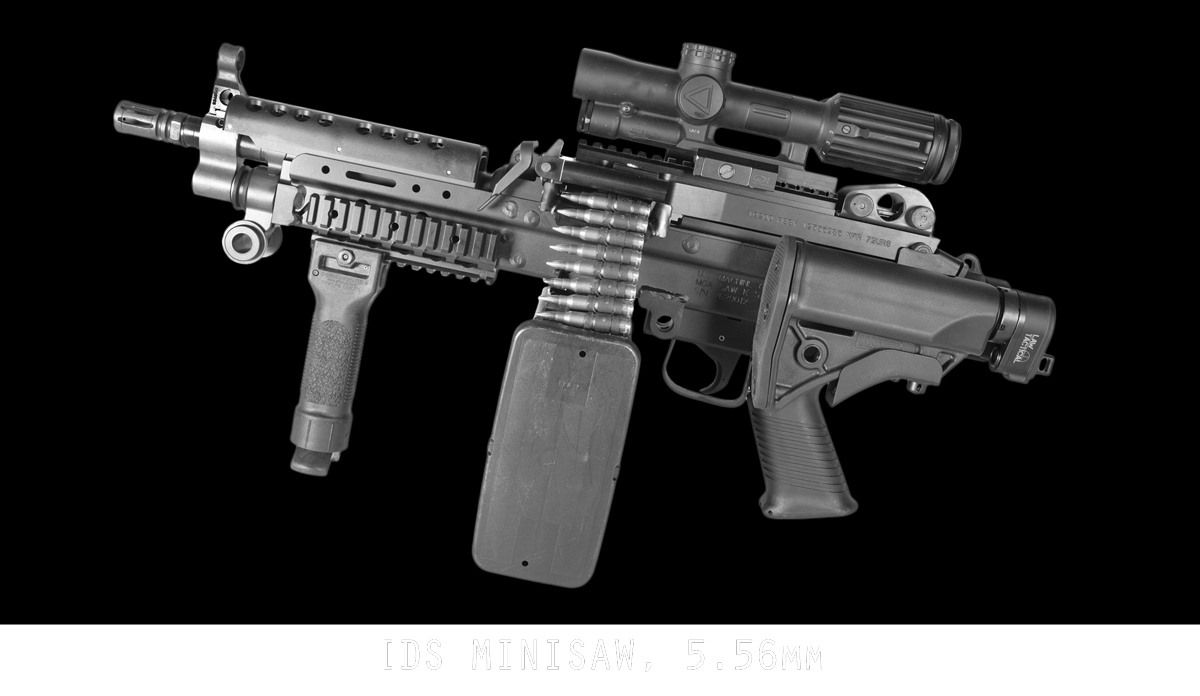 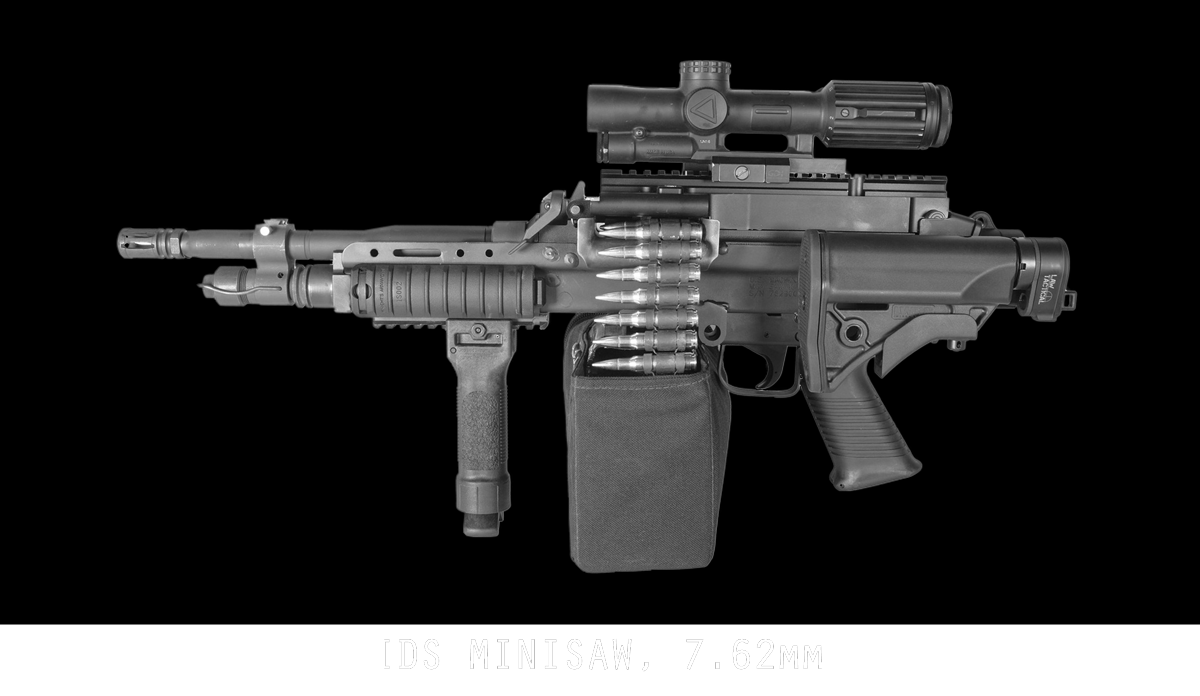 One question we often hear is why build off the M249 and not create a new platform completely? The answer to that is simple: we're not looking to reinvent the wheel. While the M249 may have developed a mixed bag reputation, the reality is that many M249 weapon systems in service with the U.S. Military are not properly maintained; recoil springs that barely send the operating group home, bolts with double or triple their suggested round count, fire control groups with worn out sear shoulders, the list goes on. All of these are factors that contribute to problems with performance and reliability, and all of these issues are addressed with proper maintenance. When properly maintained, the M249 is an outstanding weapon system that offers unparalleled firepower in a package small and light enough to be carried and operated by a single warfighter.

The M249 family of weapons is in service with over 70 countries. With an end user base that large, switching to a new platform can often be cost prohibitive, and a logistical nightmare. In addition to cost and logistics, integrating a new weapon system would require significant training time to for armorers and shooters alike. For these reasons, we have decided to improve the SAW to extract maximum performance using modern machining techniques, advanced super alloys with incredible durability, low friction corrosion resistant surface treatments, and proprietary heat treatment techniques to push the SAW to the razor's edge of its performance potential. We do this by manufacturing our own weapon systems, and also offering retrofit packages for existing weapons to take advantage of these incredible performance upgrades.

Infantry Defense Systems (IDS) was founded in 2020 with the goal of creating the most light weight and user friendly belt feds possible and getting them into the hands of the end users. Firearms innovation for the last three decades has primarily been driven by the consumer market; optics have gotten better, triggers have gotten smoother, rifles have gotten lighter and more compact, and thousands of new products have come to market to meet the demands of the private sector customer. With so few belt feds being in the hands of the ordinary citizens, stagnation in this field has become the status quo. Sure, maybe there's a new stock here, a different handguard there, but very few people are interested in bringing belt feds into the 21st century. At IDS, that is our goal: stronger, faster, lighter, better.  Whether it be through the highly modular, multi caliber IDS SAW, or the ultra compact and light weight MINISAW, we strive to make a product that feels at home in the hands of the 21st century warfighter.